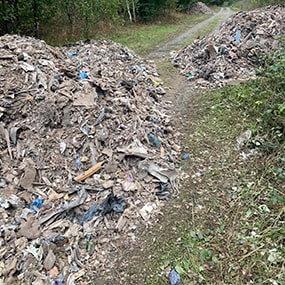 Man was found guilty and fined £21,463 for failure to cooperate with fly-tipping enquiry.

On 10 June 2022 at Medway Magistrates Phillip Rumsey, aged 56 years, of Plough Road, Minster on Sea was found guilty of an offence under Section 110 of the Environment Act 1995.

Rumsey failed to appear and was found guilty in his absence.

A tipper truck that was involved in one of the offences that occurred in Cobham was identified and was found near to the A2 at Shorne. It appeared that the tipper truck had broken down after colliding with a roadside object and had been abandoned.

Whilst Environmental Enforcement Officers were seizing the offending vehicle Rumsey arrived at the location with a tow truck to recover it.

He was questioned by Gravesham Borough Council Officers and gave false details to them. He also lied about who owned the vehicle.

Rumsey was subsequently identified and was served a notice to provide documents relevant to the enquiry to the investigating officer. Despite visits to his home address he failed to engage with officers or provide the requested documentation.

Rumsey is the first of several offenders prosecuted in relation to the series of fly tipping offences and although his part in the offence could not be proved, his conduct obstructed the investigation.

Cllr Shane Mochrie-Cox Cabinet Member for Community and Leisure said “Gravesham Borough Council will not tolerate fly tipping on public or private land. Our Environmental Enforcement Team will always investigate environmental crime, no matter where it is in the Borough, and prosecute those involved, backing up our promises to deal with fly-tipping and also showing our support for the victims of crime that suffer when such criminal behaviour is committed.

They have powers under the Environment Act 1995 to require anyone who has documentation that could assist with an enquiry to produce it to them. Failing to do so is a criminal offence and the team will prosecute anyone who fails to assist with or obstructs an investigation.

I hope that this substantial fine will act as a warning to anyone who chooses to ignore our investigators or obstruct them. I also hope that it acts as a deterrent to anyone who is involved or is considering becoming involved in fly tipping or other environmental crimes."

You can report fly-tipping in Gravesham online or if you have any information relating to environmental crime you can e-mail Tipoff@gravesham.gov.uk